For more about botany in the Buckeye State, visit  ohioplants.org, the companion to Ohio Plants, EEOB 2210.

The geology of Ohio can be divided into two categories. The western part of the state consists primarily of limestone, a nonresistant rock type in this humid climate contributing heavily to the overall erosion and flatness that you would find throughout this section of land. In contrast, this is the eastern part of Ohio, which primarily consists of sandstone underlain by shale. Sandstone is far more resistant to water erosion than limestone, however, shale is not and in this section of the state you will often find deep valleys carved through shale, and the tops of those valleys and hills surrounding them are capped by sandstone.

The difference in these geologic landscapes can be understood by looking back 200 million years ago when Ohio’s original strata of sedimentary rock occupied the state in an arch. This stratum consisted of a thick series of limestone overlain by shale overlain by sandstone and was tilted into this arch formation as the Appalachian Mountains began forming around this time. The erosion of the tallest portions of the arch surfaced the limestone that is characteristic of western Ohio, while the youngest sandstone in the east was not eroded away and left behind the sandstone hills that are characteristic of the Cleveland area. All of this erosion was conducted by a preglacial stream called the Teays which cut through the land during its entire 200 million year lifetime, only ceasing activity by the advance of glaciers in the most recent Ice Age.

These glaciers were greatly slowed by the steep-sided sandstone hills that were previously mentioned in their place in eastern Ohio, forming a glacial boundary no farther south than the latitude of Canton. The boundary is pictured below on a map of Ohio:

Glacial till, a mixture of sand, silt, clay, and boulders, was drug along with the large pieces of ice previously mentioned and similarly differed in composition as the rest of Ohio.  Western Ohio till is rich in lime and clay while Eastern Ohio on the other hand contains very little lime and clay except around some larger deposits of sandstone hills. The soil of western Ohio is thus limy, clayey till which is relatively impermeable that is poorly aerated and drained. Thus water sits atop the soil creating low oxygen environments in the wet seasons and increases the effect of droughts during dry ones, however, the nutrients here are comparatively abundant. In Eastern Ohio, the permeable sandstone produces a very acidic, low nutrient soil which is increasingly dry as one goes up a hilltop. Water is more abundant lower in elevation however as it runs off shale deposits throughout the earth creating less acidic till with more nutrients.

A hardy tree that loves hillsides and is said to thrive on neglect, only averaging about 10-15 feet in growth over 15 years. The Hop Hornbeam has alternate, simple leaves and bares papery capsules that contain its nutlets which are often consumed by many types of wildlife. This tree’s wood looks almost scaly and is hard enough to be used frequently for tool handles.

This unassuming tree at Darby Metro Park can end up growing to well between 50 to 80 feet tall at maturity and its bark is extremely rough to the touch. It has opposite, pinnately compound leaves and its fruits are samaras, winged seeds! Blue Ash is far more likely to produce perfect flowers than those in its immediate family, and so it is the most likely to self pollinate and show us those wonderful samaras.

These Oaks can grow up to 70 feet tall with a trunk diameter of 3 feet and have simple, alternate leaves that are ovoid in shape and have sharp-toothed margins. They bear separate male and female flowers and produce light to dark brown acorns and are named for their similarities to the Allegheny chinquapin which is a relative of the American Chestnut.

Fragrant Sumac is a thicket forming shrub that may ascend up a vertical surface or lie on the ground. The leaves are alternate and compound with three leaflets that lack noticeable stalks. These leaflets closely resemble that of Poison Ivy but this variant is quite safe and is actually edible as well as one of nature’s own scratch and sniff plants.

This tree has spearhead-shaped, alternately arranged, and pinnately compound leaves and grows anywhere from 13 to 24 inches each year, reaching up to 60 feet high at maturity. It produces dark red drupes that persist during winter, providing food for many winter birds. In the 17th century, the Hackberry’s wood was used for flooring in old houses.

Many of these species only extend to a few settings in Ohio, including the Sweet Buckeye which is believed to be restricted outside of the glacial boundary by climate, though a reason is not fully known. Hemlock on the other hand extends far to the north in search of cool, moist environments that its growth is restricted towards.

Cedar Bog Nature Preserve was the first nature preserve in Ohio purchased with state money and is considered by many to be Ohio’s premiere natural area. Cedar Bog is a National Natural Landmark and is recognized for its national significance. It ranks the highest of any site in the state on the Ohio Floristic Diversity Index, meaning it has an incredible amount of variation in the plants visitors can observe! Despite its name, the park is actually classified as a fen, not a bog. The area is often flooded with water from runoff and ground water that interacts with the sandstone bedrock in the area to make the water alkaline. The perfect conditions for the growth of sedges!

My project during our trip to Cedar Bog was to locate and document two different sedges at the location. This was especially difficult as the species located around the fen were striking similar, but I found two examples anyway!

The stout and tall common club-rush is an abundant plant of shallow water, including the margins of lakes, ponds, canals, slow-moving rivers, and ditches. It flowers from June to August and spreads using rhizomes. These sedges have dark green, spiky stems that are rounded in cross-sections. The stems bear loose flower heads with brown, egg-shaped spikelets. This is a beak rush sedge that spreads from rhizomes, stems to 4 ft. tall, has triangular leaf blades about 3/8 in. wide, distinctive basal cluster. The inflorescences at the stem tip are open, branched, loose clusters of spikelets. 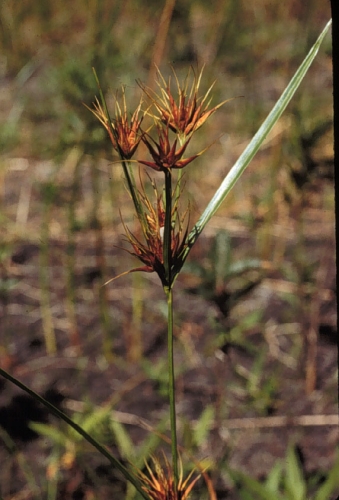